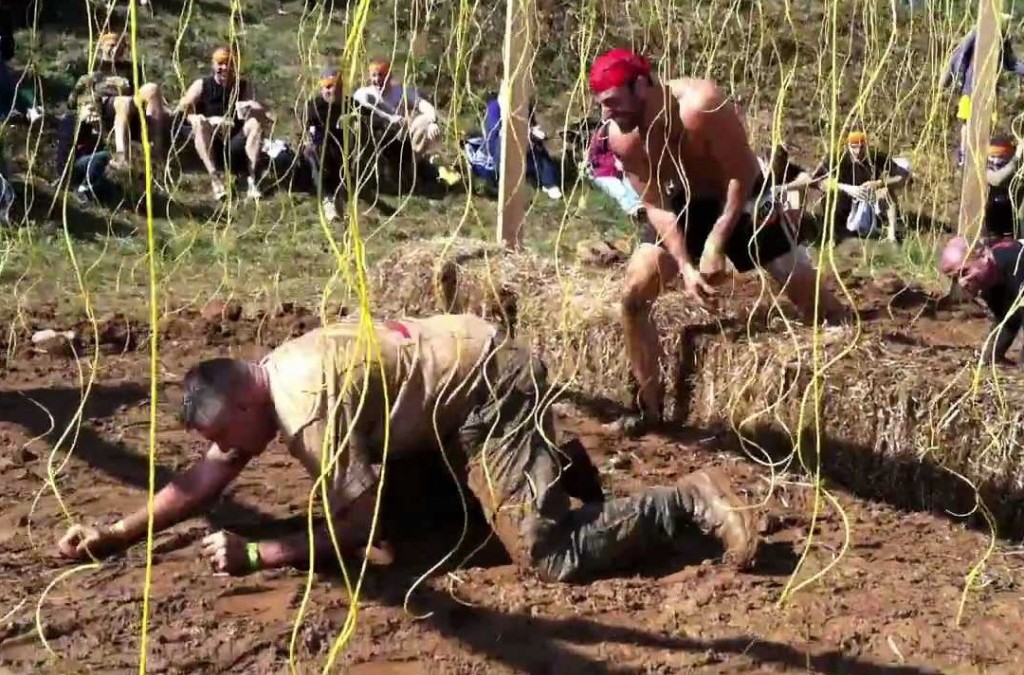 Tough Mudder Ends with a Spark

On Oct 2, 2015 I participated in my 2nd Tough Mudder. The highlight of the first Mudder (aside from finishing) was that after finishing I met up with some friends and caught a Van Halen concert. It was back in 2013, the Mudder was in Somerset, WI and I just crossed the border, met friends in Minneapolis and rolled to the Excel Energy Center. Great day and an even better night. This time around things were  slightly different. 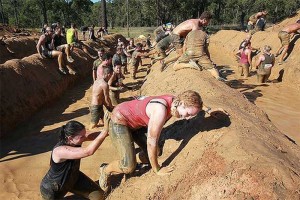 I was injured during training which is just not the way to prepare for the Mudder. It happened one night after kickball. I decided it was a good idea to go running and since it was hot outside I decided to run in air conditioned comfort at the Princeton Club. The good news is that even though I’d been out for several hours, the alcohol didn’t dampen my resolve to train. The bad news was that I didn’t have any running shoes (flip flops or spikes) so I was running in my socks. Not smart and in the end I strained my Achilles Tendon which still haunts me.

Needless to say not being able to run in the weeks leading up to TM 2016 limited my ability to train. That, and summer, really made things difficult. I will say this… since the Tough Mudder is really just a longer, dirtier than most “beer run” the training I was doing in downtown bars did have my alcohol system in peak condition. From a drinking perspective I was definitely ready.

I don’t know that we were officially representing the UW Athletic Ticket Office, but since my teammates Andy and Marcus are both current ATO employees (and I worked there about 100 years ago) we’ll go with that thought.

I was meeting Marcus for the first time and he seemed like a nice enough guy. He is younger and appeared to be in race shape which didn’t make me feel better about my poor conditioning. Andy, well, no need to go into detail here about my thoughts on AZ as he’s just a “dandy.” 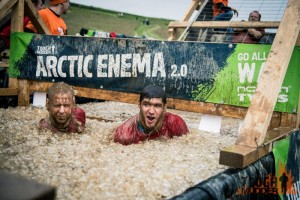 In the week leading up to the Mudder I was NOT feeling good about running. I was out of shape and I knew it. That said, I also knew I couldn’t bail on Andy and Marcus. I would live the rest of my life haunted by the memory of the race I bailed on. Dramatic? Not in the least. I see Andy every time the Badger hockey team plays at home. If I was going to bail I would think about how I pussed out every single time I’d see Andy going forward. EVERY TIME. I knew I had to run no matter what, so, I did.

Fast forward to us as we’re running the course. We’re at about the 5 mile mark at this point and I’m starting to feel better. Yes, you read that right… I’m feeling better.

The early obstacles were pretty easy and with each mile my confidence was growing. I honestly felt like I was running myself into shape as time went on. It wasn’t super warm out on race day, but we were still working up a good sweat. Enter the Arctic Enema (see picture above). Yeah, it took awhile to warm up again. 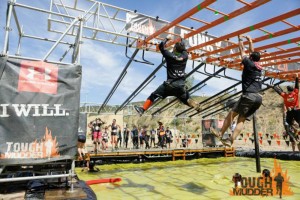 I think about it was about the 8 mile mark we hit an obstacle called the Funky Monkey. I didn’t have any trouble with the Monkey and after that I was really feeling good. I don’t think I actually yelled out “bring it on”, but that is exactly how I felt. I was unstoppable (so I thought)!

We go to an obstacle called Ring the Bell. Kind of funny how when you’re tired, both mentally and physically, things seem to be somewhat exaggerated. In this case the platform which was actually 25′ up seemed like I was 100 feet in the air. If I fell trying to complete the obstacle I would just land in the water below, but I could feel my spidey sense tingling.

Marcus jumped out and grabbed onto the trapeze looking dealy. He swung out to where he could attempt to ring the bell, but he seemed to forget to let go. Down goes Marcus.

Andy also had a good jump, catch and swing, but didn’t quite make it far enough to ring the bell. 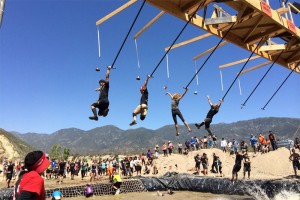 When it got to be my turn I lunged out at the handle, grabbed on and promptly slipped off. As I’d tried to grab onto the trapeze one hand was fine, one slipped off and I didn’t have enough left in the tank to hold on with one hand. I fell the 25′ to the water and slapped down on the surface. Since I’d lost my grip I was off balance and was not able to get ready to make a smooth entry into the water. Ouch!

The safety people cringed when they heard me hit, but I made it out of the pit without assistance. I’m sure they laughed as I pulled myself up on shore and got ready for the remaining obstacles.

So we find ourselves about 100′ from glory. All that’s between us and the finish line is Electric Shock Therapy. As participants who have completed a Mudder in the past we have the option of bypassing Electric Shock Therapy for an easier obstacle. Not even a need to discuss among team members… Not a chance we’re taking the easy way out! 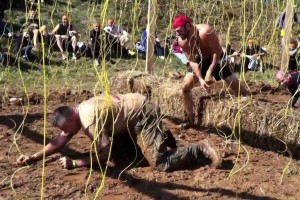 Andy goes first and catches a spark or two, but for AZ (three time finisher) its business as usual. Next up is Marcus and he goes through just fine. Now it’s my turn. I’m feeling good, I’m feeling strong and therein lies the problem… I start quick and go too fast. I’m getting zapped left and right, but making progress. I get to the first row of hay bales and lose my footing. I’m down… and soon, out.

I’m getting the sh*t shocked out of me. The really bad thing is the wires are bare on the bottom and they’re hanging right above me (about 18″ off the ground). As I lift my body out of the mud at all to move forward I get shocked. At one point I lost consciousness.

I wake up and my face is literally in the mud. I have mud in my eyes and mouth. Somehow the guys supervising the pit haven’t shut it down yet. I guess because I kept on going they figured why kill it? I’m still getting zapped, but I’ve crawled over the 2nd row of hay bales and I’m on my way to the promised land. I can hear each and every pop when the wires hit my skin or my shirt. 10,000 volts makes quite a sound. I get to the last row and Marcus pulls me over. I’ve finished and Team Marcus, Andy and Dane feels VICTORY! 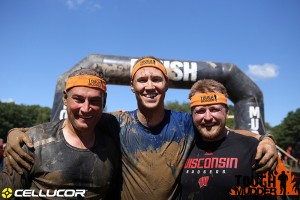 We move to the shower area to get cleaned up. I tried washing the mud out of my eyes with a hose, but it’s not working. I eventually find an eye wash station and they clean me up. The mud still burns and my eyes are swollen, but I FINISHED! I overcame a brutal finish and I’m very happy to be in the group of finishers. I didn’t want to go, but I pushed myself and finished. Thank you Andy and thank you Marcus for leading me to the promised land!