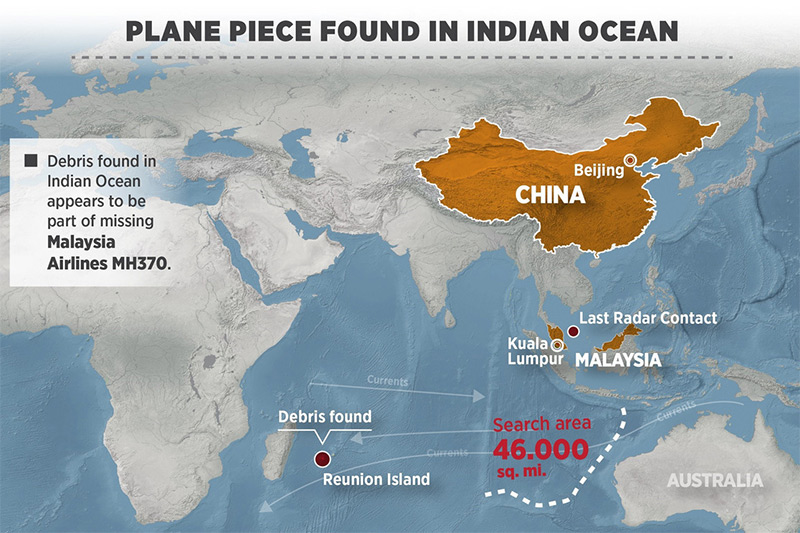 Lots of theories… no solid clues

I feel like I’m a little late to the party regarding the disappearance of Malaysian Airlines Flight MH370. The plane, a Boeing 777 ER-200, en route to Beijing, China, from Kuala Lumpur, went missing on March 8, 2014.

Keeping in short and sweet since this did happen 11 days ago, the plane took off and about an hour into the flight, it stopped communicating. No transponder signals, no radio signals, no ACARS data transmissions… nothing.

According to radar the plane changed direction. It was heading North to Beijing and suddenly turned West toward the Indian Ocean.

Experts have basically two theories to explain the lack of communication and the change in direction.

Theory 1 – Andrew J. Zywicki
While Mr. Zywicki has zero formal training in aviation (he did mention that he has flown on a plane many times) he does seem quite intelligent so we’ll go with his theory first.

Andy believes the plane was hijacked and landed at another location for the sake of committing very bad acts (see Dirty Bomb). This theory isn’t without it’s supporters as evidenced by the Mirror’s article and map illustrating the 634 locations the flight 370 could have landed at based on the amount of fuel the plane had at the time it went missing and the size of the air strip. You can’t land a 777 just anywhere.

The Mirror also has a great blog where they’re constantly detailing the developments of the day.

Theory 2 – Dane Fjelstad
Mr. Fjelstad, while not a classically trained bloke seems to be an expert on absolutely nothing. We’re listening to him only because he’s authoring the article.

So, Dane’s explanation… There was a fire or some emergency on the plane. I’m thinking it was in the cockpit and was giving the pilot and crew problems. It got to be so bad that they crew turned to the west about an hour into the flight in an effort to land the plane in Thailand. However, before the plane could reach Thailand all the navigational systems were knocked out and eventually the crew as well. Overcome by fumes or smoke… something.

The plane continued flying west on it’s own, passing right over Thailand and eventually running out of fuel and crashing into the Indian Ocean. I can’t explain why Thai officials didn’t pickup flight 370 on their radar. Maybe they were on break?

Regardless of who’s theory is correct there is a very large scale search going on. Based on the point of last communication and the amount of fuel aboard, researchers have mapped out the locations where they believe they have the highest probability of finding the plane.

Just for scale some interesting facts regarding the search area are included below:

At this point nobody really knows for sure what happened. A very sad situation for the families of the passengers as they have very faint hope for seeing their loved ones returned alive. Worse than faint hope is not knowing the passengers fate.