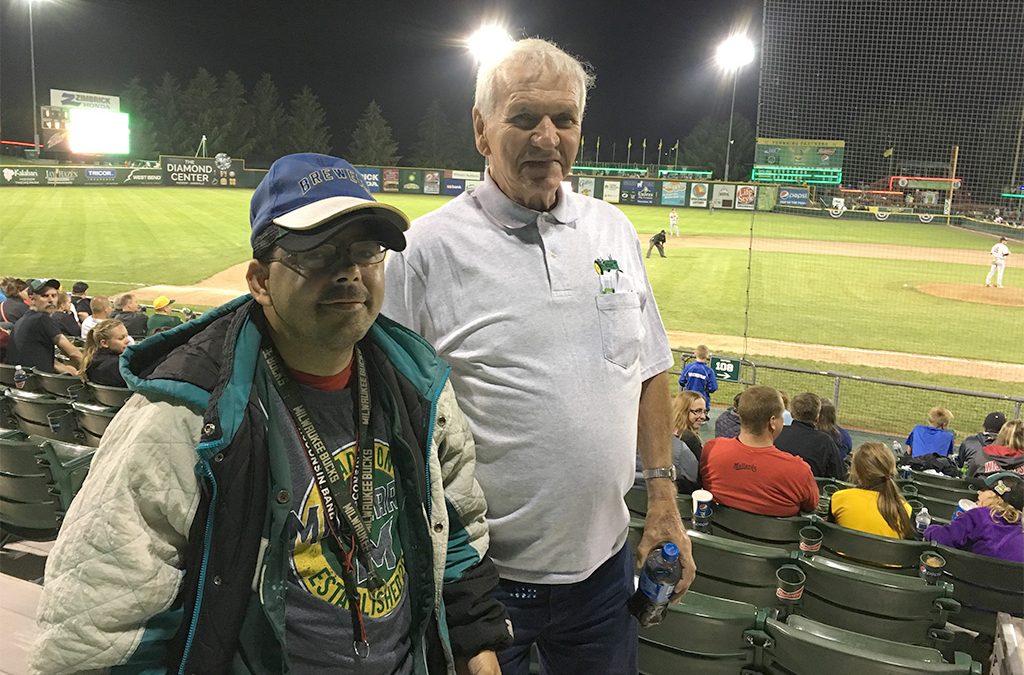 I was reading a story today about a parent who got tossed out of his high school aged kid’s baseball game. It sort of reminded me of the Mallard’s game that my Dad and I went to a few weeks back. I realize I wasn’t playing and he didn’t get kicked out, but we were at a game. Emotions ran high as my Dad has zero tolerance for mental errors on the base paths and must really likes the Mallards. 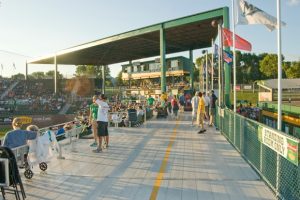 Location where the Hat Man stands

When I read that story about the parent who got kicked out it reminded me about how “passionate” some of the fans get at the games. I say passionate as a nice way of saying they’re losing control of themselves and need to cool out a bit. I’m sure every parent believes they are not “that parent.” The one that everyone stares at, the one that embarrasses their child. Thankfully, my Dad truly wasn’t that parent. Sure, he was critical of me and my efforts on the diamond at times, but mostly supportive and never out of control. And most of all… never “special.”

What do I mean by “special?” I’m talking about a guy who just gets under your skin. It might the the things he says or does. Or, it might be the way he says things. In the case of the dude at the Mallard’s game… it was that he was talking to himself… really loud. Talking to himself, or maybe nobody in particular, a lot. Yes, not his fault he was “special” and everybody, including me, was very nice to him. It was very obvious he’s a regular at the Duck Pond.

Maynard on the zip line

The game I took my Dad to was my first Mallard’s game of the year. As usual, I was impressed. They seem to keep adding more amenities and activities to make the games fun. So many options for seating, food, drinks and promotions. We went on a bobblehead night, but honestly it was an ugly bobblehead so I didn’t buy the bobblehead ticket package. Not to worry though as my Dad will be getting a bobblehead when we go to the Midwest League All-Star games (yes, a doubleheader) on August 9th. The Clarkster will be pleased.

Anyway, in addition to be impressed with the Mallard’s game day experience I was also noticing that my Dad’s baseball knowledge was on display. I guess I shouldn’t sound surprised as I’ve not watched all that much baseball with over the last 10 years. What I do remember about watching baseball with my Dad is that he gets locked onto things. He’ll voice his frustrations about things over and over and over. I’m thinking of his criticism of Ryan Braun for standing too far away from the plate. Or Jonathan Lucroy taking the first pitch in virtually every at bat. I guess it’s good to know that some things have not changed. Or maybe it’s because we were watching the Mallards instead of the Crew? Regardless, my Dad knows his baseball. 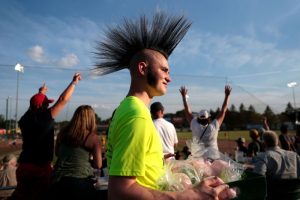 Even the vendors are characters

I enjoy going to baseball games, Mallards or Brewers for a lot of reasons. An underrated, but valid reason is for the people watching. Take for example the guy I mentioned before. He was kind of entertaining, but also a little irritating with all of his talking to himself, yelling and whatnot. And did I mention he was wearing two hats? Yes, two hats… one on top of the other. Don’t ask why as I didn’t ask. I just figured the hat on top was protecting the one under it.

My Dad kept asking “what the hell is up with that?” I just told him “I guess you wear two hats when one just isn’t enough to get the job done.” I’m not even sure what the job is, but he’s got it covered.

I’m really glad I got a picture of my Dad and the hat man together. That just made my day.

I took my Mom to a Mallard’s game this year as well and the hat guy was there too. Our visit to the Duck Pond was short because of a down pour, but we made the most of our hour at the ball park. We walked around and looked at the entertainment stuff. We ate, grabbed some beverages and walked through the gift shop. While we were eating the rain was very light. Hat man was there, wiping off tables and we were lucky enough to get one of them that he’d dried off. I offered him a soda taking care of our table, but wasn’t up for one.

Mallards baseball is just great entertainment. Really looking forward to the All-Star game doubleheader on the 9th. Me, my Mom and my Dad. It could be a lot of fun. Hoping that the Hat Man will be there.