In what has  become a yearly tradition I watched a Blackhawks game at my favorite bar in Chicago with the biggest Blackhawks fan in Colorado. And is tradition the Hawks got the WIN! 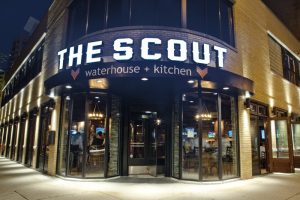 The Scout Bar in Chicago

The Scout Bar in Chicago

So the tradition goes back to Arianna and I watching the Badger hockey team take down #2 ranked Minnesota back in 2013. The Badgers had struggled early in the season, but came to play at Soldier Field. They beat the Gophers 3-2 and jump started their season.

After the game Arianna and I celebrated the win by having dinner The Scout. We really liked the place and decided it was our lucky bar.

The Scout and the Hawks

The next season when the Stanley Cup Playoffs had started Chicago was down 0-2 to St. Louis. We decided that we need to help the Blackhawks change their luck so we decided to drive to Chicago for game 3 in hopes of turning things around. Chicago won that night 2-1 in less than impressive fashion, but a win is a win and they got things going in the right direction. They beat St. Louis, but lost in the Western Conference Final to eventual champions, the L.A. Kings.

Last season, Marc Wisneski and I talked about hitting a Hawks game. We planned the weekend and Marc flew in from Denver. Well, the ticket situation was tough (read “too expensive:) so we decided to just hit The Scout. Yeah, “just hit The Scout.” WE HAD A BLAST! Chicago beat the Tampa Bay LIghtning enroute to another Stanley Cup. It was a short trip as we both went back to our real lives the next day, but a great experience.

Marc and I again talked about doing a Chicago weekend. Actually, more like a Chicago day. It was a Thursday night and we vowed if the Hawks won game 5 we’d be in Chicago for game 6. Kaner scored the 2OT winner and it was on!

Kane’s 2OT Goal is Why I Love Hockey

We decided to meet at O’Hare Field and take the train into the city. We walked about 3 blocks once we got off the train and we were at the Holiday Inn Chicago Mart Plaza.

We walked to hotel bar, the Blackhawks Store on Michigan Ave and then to lunch at Harry Caray’s. Great afternoon, but it was approaching game time.

The walk from the hotel to The Scout is about 2 miles, but it was a good time to loosen up and discuss strategy. We arrived at about 5:15 pm (7 pm game time) and had to wait for a table. Once situated the night picked up speed. 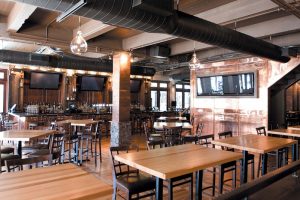 Inside The Scout… the calm before the storm

Chicago scores first and the place goes bananas! The Scout is packed with wall to wall Blackhawks fans. You can’t believe how many people are there to cheer on the Hawks. Unfortunately the Blues score the next 3 goals and the 1st period ends with hometown boys trailing 3-1.

The 2nd period gets off to a great start and any feelings of panic (I had none) were gone as the Hawks were coming back. They ended up scoring the next 5 goals enroute to a 6-3 victory. The place was electric!

I may have forgot to mention it, but this time around we made no effort to purchase tix. Well, I checked prices, but I knew what I was getting into. I was ready to watch at The Scout and once again, The Scout delivered.

Marc and I rolled back  to the hotel about midnight and had a few more beers in the hotel bar. A great night.

The next day we got on the train and headed back to O’Hare Field. I hit the parking lot and Marc made his way to the Spirit Airlines gate. It was the end of a very short, but very fun trip.

Hopefully the starting point of something great again this season. GO FUCKING HAWKS!

Update: The Hawks ended up losing game 7 at St. Louis a couple of days later. Brent Seabrook’s slapshot with about 3 minutes left in the game hit both posts before bouncing out. Tough way to lose, but St. Louis is a really good team (backstopped by former Badger, Brian Elliott) and I’m pulling for them.